The past couple of weeks have been pretty insane in my life. After an early spring week in the woods, I got back to the city to live painting at a benefit for the victims of the explosion and fire on East 7th Street.

E.V. Grieve billed it as: “The sold-out concert, spearheaded by East Village-based writer Alan Kaufman and artist Jim Storm, has pulled together donations (including from Sting, Trudie Styler and Stone Gossard) and volunteers both near and far to lend support.” The emcee of the event is Randy Jones of the Village People.

Big thanks to my friends Mollie King and Clayton Patterson, I was able to be part of this great event.

I made this live painting of Lou Reed on stage

while David Peel and his band played and then through the next set with a cool act called Mothxr. I won’t lie, it was pretty damn great to be back stage with Patti Smith and Lenny Kaye 🙂  They sounded legendary. The house was packed and I could only see the back of Lenny Kayes’ head from my perch backstage but like I said, they sounded great.

I’m selling this Lou Reed portrait to raise funds for the benefit.  All reasonable offers will be considered.  Support your fellow New Yorkers whose homes were destroyed in the explosion.

A few days after the benefit, I was walking down Avenue A and I stumbled into my pal Fly who was in a hurry off to a book signing party in Brooklyn. (Fly makes these great zines called Peops.) I decided to go check it out myself and there I found Jim Jarmusch, Lydia Lunch, Joe Coleman & Whitney Ward, Kembra Pfahler,  Gibby Haynes, Bill Leroy, Luigi Scorcia, Jim Muscarella and other dignitaries of the old school underground, all there to promote the signing of Jonathan Shaw‘s new book.  I asked Jim about his Iggy Pop film and he said, “No!  Its a Stooges film!”  Its about the whole band.  And I can’t wait to see it.

I caught Jim Jarmusch out and about in Brooklyn

There was so much else all happening at once during this time and it felt like every minute was booked with something going on – but all of it was super fun stuff!

In between 4heads meetings (my non-profit that does Governors Island Art Fair) and setting up an art show for the abstract expressionist painter, Marty Kornfeld, at the Jefferson Market Library,

I did a live painting gig at the Montclair Art Museum in Montclair, New Jersey.

I was on stage with Sean Bono and Dre Trenier, with Lexi Bella announcing. It was a classy event – a big fundraiser and we were asked to choose a work of art from the museum’s collection to reinterpret live on stage. I loved the idea and I found a door that should have been locked, being held open by a wooden doorstop – so I slipped inside to roam unsupervised through the galleries. I found a small portrait of a young girl selling cigars from a tray strapped across her shoulder. I liked the soft melancholy raw umber, rich as dark soil for this innocent creature. We were to paint through three sets; 25 min, 25 min, and 15 minutes to end. Our canvas was the Art Battle standard, 48″ x 60″, and we were painting with acrylics and paint markers.

This is the painting I made that night, which went home with a lovely woman named Fanny, who helped raise some good money for her favorite museum.

Another great Art Battles gig was with Dre Trenier and myself, both doing six straight hours of painting on one of those big canvases.

It was a party named Babel and a thousand people were expected to fill the second floor and balconies of the Bowery Hotel. Let me just say one thing about the Bowery Hotel. I am not a big fan of the East Village and Lower East Side being “developed”. But my biggest complaint is the visual pollution from the bad architecture invading our beautiful New York City. The glass and aluminum shopping mall chic, that has been astoundingly prevalent as an aesthetic choice by so many new real estate moguls, has got to end. But the Bowery Hotel stands pretty much alone in the category of new buildings that aren’t hideously painful to cast one’s eyes upon. I would even go so far as to say its a damn good-looking building and I wish a few of these other demon “developers” will take note of a trend sweeping the city of making buildings that actually don’t completely suck the soul out of anyone who happens to pass by.

It was a good looking crowd that filled this old (looking) building that night. The music was trancy there was a definite hippy, green, conscious, yogi vibe going on. None-the-less drinks were sold and the party seemed like quite a lot of fun.

I couldn’t be sure because I was pretty involved painting this giant portrait of one of my favorite people, Nikola Tesla, but it seemed so. I had an inkling for what the crowd was like and chose Tesla with the expressed intent of attracting interest and maybe even a sale.

As I began the piece, it was easily recognizable as Tesla and several people came up and commented on that.

Others asked me who it was, and I was shocked. I began to realize how few people know who he was. True, he was omitted from American history books but I expected more out of this crowd that seemed so green and well-informed. This was the man who, were it not for J.P. Morgan and Thomas Edison, would bring free energy to the entire world. I know that his methods were suppressed because they were so ahead of his time. I believe his ideas will yet change the world.

Meanwhile back at the party, Dre was going crazy with deep layered glazes, painting a blue portrait of a luminous lady with galaxies in her hair. Its his thing and he’s damn good at it.

I knew we would have a lot of stage time that night too, so I brought a bag full of magazines and got into doing collage on the figure and background of the portrait.

It was a great night with tons of in-depth painting happening. I set the bar pretty high to finish this full size canvas with collage and all sorts of detail in one 6-hour stretch. But it came off well and there were many offers that night including one that went through. Thats good, cuz I got bills.

And at that party, I ran into someone I never actually thought I’d meet, star of screen and gallery, the one and only Mr. Brainwash.

Mr. Brainwash at the Bowery Hotel where I was doing live painting

If you want to COMMISSION A PORTRAIT, just click here (link).

For more about Live Paintings at Events go here: http://zitogallery.com/live-painting-at-events/

For more about Mr. Brainwash and Banksy go here: http://exitthroughthegiftshop.com/

For more about Art Battles: http://www.artbattles.com/

For more about Babel: http://babelnewyork.com/ 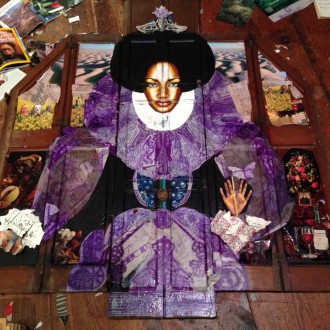 I was raised in New England and so I appreciate a good snowing-in.  Drifts up to your neck are something… 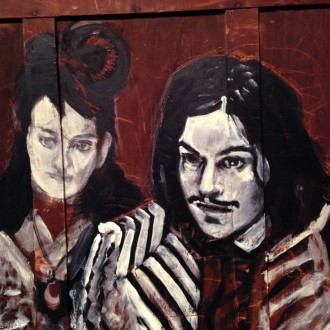 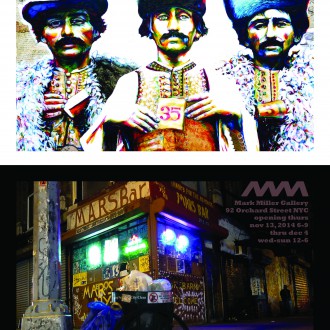